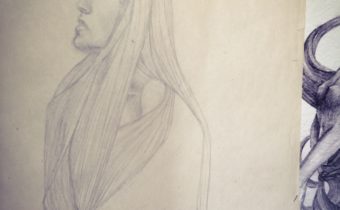 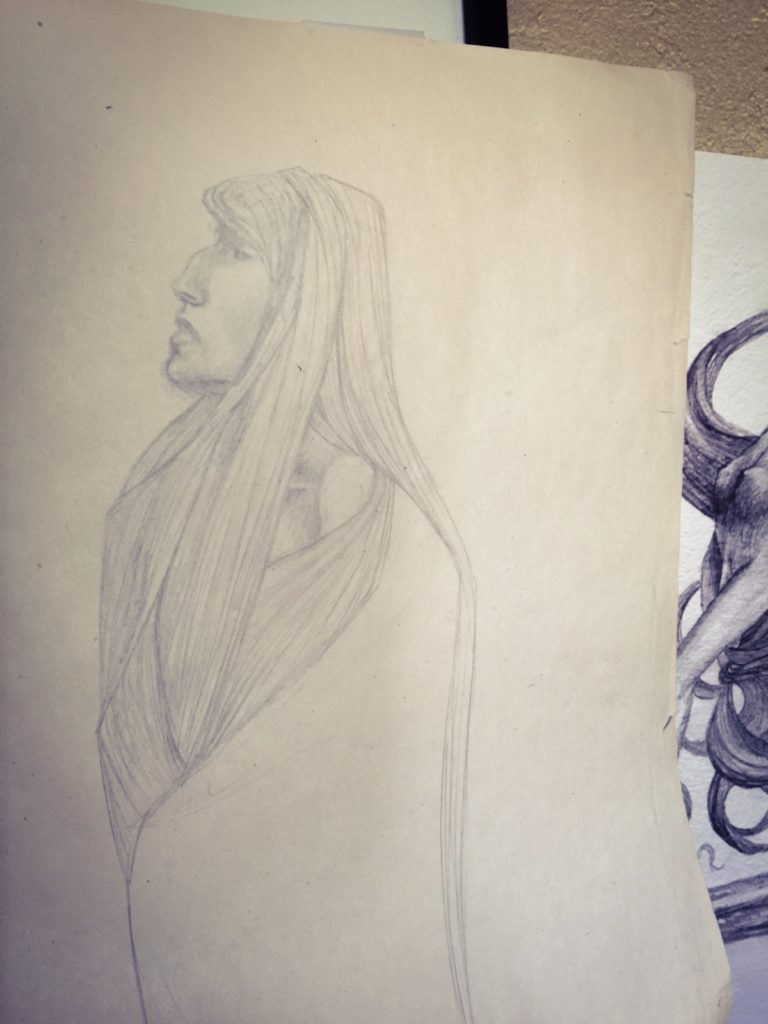 “But where do you begin?”  It’s a legitimate question I am asked often and the answer is not always satisfying.  I just do.  I start.  I’m not a compulsive creator so my mind is in play long before my hands.  Sometimes that’s a process that lasts hours.  Sometimes months.  Years. Sometimes it’s moments only.

More often than not, there is an enormous amount of research behind the final image.  If that’s not absolutely clear to the viewer then I’ve done my job by hiding it well.  If there is a particular request or goal in mind, the task is more difficult as I am trying to fit all of my racing thoughts into a box I didn’t make.  I end up busting out of the box somewhere along the seams so I don’t mind.  When I am left to my own devices, the end result feels more like a piece of me I’m leaving behind somewhere which is both exhilarating and horrifying.

Whatever the project, there is something common in the process amongst them all, every single one.  There is always a singular instance, whether it be instantaneous or long sought, when the strongest image presents itself.  I’d like to say that I find it through arduous work and toil but on the contrary, it seems to find me and decides to reveal itself when it sees fit.  And so I wait.  I read, I look, I sit and let my senses pick up signals.  There’s note taking and sketch making and plans and design but none of it really matters until that punch in the face of inspiration, which I neither earn nor deserve.  It just happens.  To begin from nothing, I have to be receptive first.  Life doesn’t always allow for it and so time passes without results, rage builds, frustration builds and fills me up until I am not still.  If I’m stuck, if I must begin and don’t know quite how, I trust that my work should reflect the time and my mind and influences on that day.  If I’ve been curious about a subject or an idea or there’s a color that’s been plaguing me, I take it as a hint and start by giving it my attention.  Sometimes that becomes something more.  Sometimes it just dies.

The sketch here was done from life a few months before I was presented with the mural project Neglected History in 2016.  There was something in the profile, the raised chin and depth of the gaze that kept this sketch on my mantle.  There was something there but I didn’t know what just yet.  When I first started discussing the mural concept, her face came to mind immediately and everything flowed from her through the design.  That’s how it happens.  I wait until it hits and then my hands can’t keep up with the flood.

In the last few weeks, I’ve taken on a new project that I’m anxious to reveal as it has captivated me unlike any before it.  I’m intoxicated by it.  The process is slow and I’m filled more and more each day but the hunting for that singular instance continues.  It will hit me all at once and the rest will flow from it but until then, I remain determined, more so than for any other work I have done, to do this subject and purpose justice.  Somehow, I’m already very sure that this will be my finest work yet.  For now, I’m waiting.