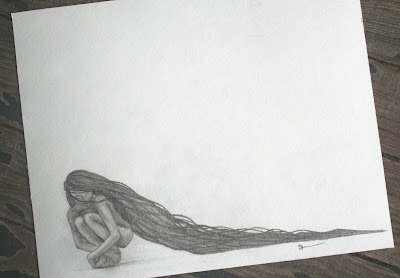 Finally, I’m back to drawing this morning.  Huge cup of coffee, three sugars and the house is silent.  I suppose my mind and my hands are taking a break from rocket propelled turtles because it seems that I have my unfinished series of seven on the brain.  As mentioned previously with the posting of a self portrait I had completed years and years ago, there were supposed to be eight pieces but only the colorful hair ever saw the light of day.  The other seven have only ever turned into sketches and figures in notebook margins.  I suppose that’s because the other seven are more honest where the self portrait was an idea of balance that didn’t actually exist for me at the time.  While we’re on the subject of honesty, it doesn’t really exist for me now either. 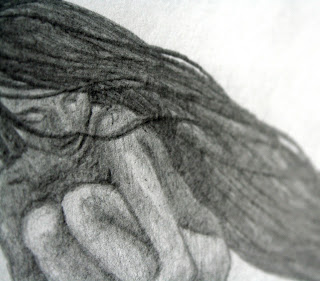 Once an idea has taken a shape in your head, tracing the roots of the idea becomes near impossible.  I also think that most ideas do not have a genesis but rather a slow building over time.  I do remember that the entire idea began with a sculpture I wanted to complete but hadn’t the resources or the courage to do at the time.  The subject matter was to be a female figure bent nearly in half at the back suspended by her own hair which tangled around her and chained her at the wrists and the throat.  It’s been years since I’ve touched clay so for now, I sketch the limbs of this idea with the hopes of seeing the entire collection in oil.  Here’s what came out today.  Thanks for reading.

5 Replies to “Unfinished Series of Seven”