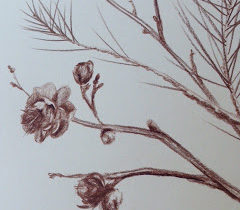 On April 1, 2013, my mother celebrated her 10 year anniversary being free from cancer.  She celebrated by telling no one.  This was partly because the date coincidentally falls on my daughter’s birthday and she would have no attention taken from her dear Scarlette.  Beyond this, beyond what my mother would consider a happy and meaningful coincidence in the date, rests a sense of privacy, of selflessness and a center which has never asked for the attention she deserves. 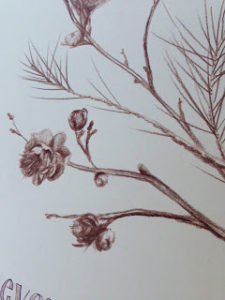 As with the other pieces I’ve drawn to honor other causes, I went searching for a meaning in a species of plant which would honor my mother.  For a friend celebrating his 10th year free from Leukemia, it was the peony, named for the Greek God of medicine and healing.  For a marine suffering from Lung Cancer, it was the gladiola which signified the warrior, the battle, the fight.  For my mother, I have chosen perseverance.
Lymphoma was one of many diseases, all lined up through the years taking turns, taking swings at her and too numerous to name.  Besides, she hates hearing the list.  The struggles continue and add up still today sending her through surgeries and new manifestations.  Most of the symptoms she keeps hidden and willfully managed despite near constant pain and discomfort.  Despite this, my mother has spent little time on self-pity.  She had me to raise and others to care for and money to make and she did it all well, exceptionally well.  She didn’t have time to recover from a childhood full of horrors I dare not share because it isn’t my story to tell.  The earlier the heartache, the higher and the thicker the wall you build around yourself and my mother has built herself a fortress.  She is a tell-it-as-she-sees-it character with no fear of judgment and an art of defense which keeps most at a distance.  Some would say she’s a pain in the ass, stubborn and difficult and I think I’d agree at times.  But I was allowed the closest; close enough to see her at her most gentle, among the birds she sings to in the garden and the plants she apologizes to for pruning.  She was at her best with me at her side and motherhood, in spite of all the odds, suited her well because she had something to give and had held on to it for me.  I was her pride and joy and had the privilege of having her give to me what she never received, of having her create a world for me that was safe and fun and full of possibility.  My strength, my integrity, my courage all come from her and when I am at my lowest, my most beaten, I feel her build inside of me and I can do anything. 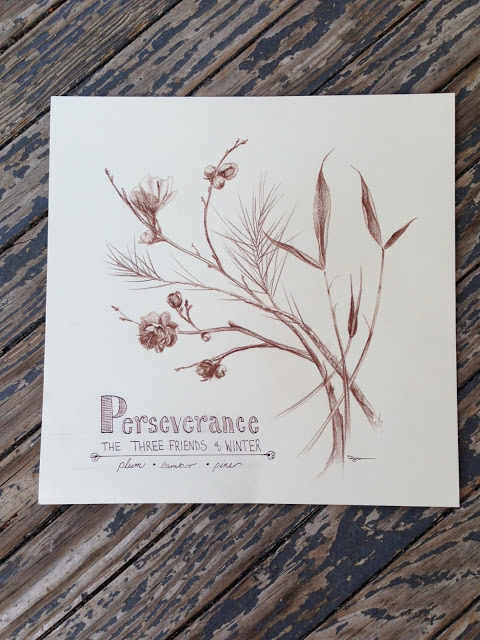 She is perseverance and so I have selected the ancient symbols of plum, bamboo and pine which are known as The Three Friends of Winter.  They have been depicted together for centuries as a symbol of resilience.  They last the harshest of winters and the plum, especially, blooms early sometimes in the midst of snow as an act of defiance against that which would kill it.  The sketch is simple and elegant, not boasting or calling for attention.  I will be donating 100% of all profits for prints sold to a charity soon to be named.  I am giving the original to my mother so that she might know how I see her, that her struggles have been worth it because I am stronger for it and Scarlette carries with her the same fire.
I’ll stop there as I’m sure she’d tell me to shut up and stop blubbering on about it.  Thanks for reading and to you Mom – Happy Mothers Day, Happy 10th Anniversary and Thank You, for everything.