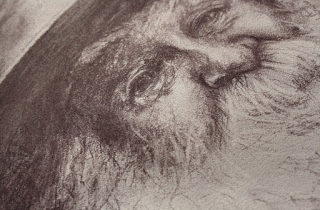 I lost a mentor, an old friend in December and I haven’t been able to write since.  I apologize for the silence on the blog but this blank screen has been staring me down for weeks and no matter what I type, I end up erasing all of it because I haven’t found the words.  I will try, desperately, not to erase all of this in the hopes that I might share this with you because he was remarkable and worth the sharing.
Captain Kenneth Drake died unexpectedly on December 21, 2011.  Mr. Drake was my high school sculpture teacher.  He was more than that.  He was the first person to call me an artist, a word it has taken me the better part of twenty years to call myself.
For some that passed through his classroom, Mr. Drake was at least, if nothing more, unforgettable.  He had a sharp wit and a wicked sense of humor with a dry, sometimes exaggeratedly harsh delivery followed with his delayed giggle.  He taught art.  Not sculpture, not pottery, not the nonsense of my previous art classes.  His students were introduced to Picasso, Calder, Degas, Giacometti, Brancusi and Rodin.  He concocted comical stories about the pieces so that his students would remember them and damned if he wasn’t right.  Most of the pieces I know by heart I learned from him.

For some students, he was more than just unforgettable.  Mr. Drake’s class was where we learned how to see.  He was constantly discussing the differences in the right and left brain.  He taught us to stop our left brain from making assumptions about what we think we see and learn to look with the right brain at what is actually there.  This was a game changer for me and so many others that got it.  To be able to control your mind, find gateways into a place where you could make your hands tell some truth about the world, to see – that was a gift he gave us, that he gave me.  The world was a new place.  This perspective was fueled by his absolute joy in the process of creating.  Mr. Drake probably had more talent in one hand than all of us put together but delighted in every detail that we made, in every effort we put forth.  He was giddy over the act of creation, of us expressing ourselves and how we saw the world.  Every eyelid was a triumph.

For some of us, he meant even more than that.  In other dedications, it was said, perhaps even better than I can describe, that his classroom was a home, a sanctuary.  Unaccepted elsewhere, misunderstood, underestimated, ridiculed, or lost, just lost – some of us needed Mr. Drake, even if we didn’t know it then.  We were equals there, not from the circles or definitions others used to box us in.  We could be whatever we were without having to apologize for it.  He was strict but I would say that the respect that his students showed him was not because he demanded it but more because he had earned it.  You were a person there, not a kid, not a rotten element, not lesser than.  It would be lovely if he had built that sanctuary for a few, for me only but his classroom was a home to countless students who all recall their very specific connection with him.  Perhaps Mr. Drake’s finest talent was in seeing people, being open enough to see them, to reach them and talk to the part of them that needed the talking to.

For me, Mr. Drake saw me as an artist.  He recognized that there was an entire emotional universe in me that had nothing to do with my academics or collegiate expectations or the roads that were being paved for me, by me.  He told me I was an artist.  I didn’t listen.  He knew who I was long before I did but I didn’t listen.  I went to college, tried dozens of majors, had a love affair with Political Science, got deep enough into pre law to know I didn’t love it and then, late in my junior year, I returned to clay.  I sought refuge in the studios and painting classes.  Even then, I felt like a tourist amongst a colony of artists.  I finished my degree, came home and hid.  I hid for a long time.  I was lost again.  I immersed myself in writing and painting and film and any other possible outlet of expression that I could find but I showed most of it to no one.  I think I was ashamed of not knowing, of having failed at finding something and ashamed that I still was so unsure – more ashamed that I was of little use to anyone.

If you’ve been reading along with my blog, you know that I only recently started drawing again.  I’ve found myself in and out of art over the years but last August, on a whim, I decided to rekindle a sacred part of myself which had been, for sometime, neglected.  I was only drawing for a few days in August when I went looking for him, Ken Drake.  I wasn’t sure that he would remember me but to my delight, he answered a friend request on Facebook and began to follow my blog.  I began to draw with him in mind, always asking whether he’d like what I had done, if he could tell I rushed through that one or that a particular piece was my favorite.
“An Artist doesn’t scribble at the line Jackie.  An Artist knows where the line is.  Make the line.” Ken Drake
I was his student again. Even after twelve years had passed since I was in his class, I heard his voice in my head.  He bought two of my pieces in the months to follow and posted some links to my work which thrilled me more than any other compliment I received, perhaps ever will receive.
And then December came.
I had thought to go see him a few times but life got in the way. That’s not true.   I didn’t make the time.  I can’t blame anyone but myself and after all of those years, I didn’t get to have that very long overdue conversation.  I had mentioned him in one of my blogs and thanked him for his support but not anything close to what I wanted to say.  In truth, I thought he was just being nice.  I thought it was lovely of him to remember me, to support me in buying my pieces.  And then he had passed without me really saying thank you.
I went to his viewing feeling a bit out of place, amongst students and teachers and family that knew him better.  I was a student of his from years ago and I still couldn’t quite verbalize why I was so shaken by his passing.  When I went to give my condolences to his wife and children, I introduced myself and told them I was so sorry for their loss.  What I did not expect was that they knew my name.  What I did not know and that they have since been so generous in explaining was that Mr. Drake had read every post of my blog and loved my work.  He had told everyone about the student who mentioned him in a blog and was even offering ten points extra credit in his college course to anyone who wrote about one of my pieces. 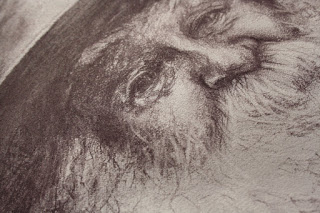 Without knowing it and certainly not how I had intended, I had, perhaps, said my thank you in having finally listened to him.
As for the drawing today, we have an attempt at a very famous photograph of Walt Whitman.  That’s me in Mr. Drake’s class working on a bust of Walt which I unfortunately didn’t hollow out enough before the firing and only a portion of the face survived.  I’m not sure whatever happened to the portion of the face but I remember Mr. Drake displaying it in his class for a time.  Whitman was and probably still is my favorite American poet and I think of Mr. Drake and the unattainable curve of Whitman’s nose every time I see this photograph or read a piece of Whitman.  I’ll be adding some music over there in the itunes widget that I used to work through this unrelenting stretch of writing and drawing block.  I hope you enjoy.  As for this original, I think I will keep it and hang it where I can see it everyday.
And to you, Mr. Drake, I thank you and I think I might have gotten the curve of his nose right this time.
Always Your Student,
Jackie
For more information on Ken Drake:
http://www.pressofatlanticcity.com/communities/hamilton/atlantic-cape-faculty-staff-art-show-features-mays-landing-man/article_2deb0dda-9645-59e8-bade-c5ea3277a89e.html
http://www.pressofatlanticcity.com/communities/hammonton_egg-harbor-city/a-life-lived-sculptor-molded-hammonton-high-school-students-lives/article_98625808-494b-11e1-95ec-001871e3ce6c.html
http://www.ettc.net/njarts/details.cfm?ID=1016
http://jessreynolds.tumblr.com/post/14659879901/thank-you-ken-drake
http://tentacledmonotony.blogspot.com/2011/12/i-finally-have-something-to-say.html
http://boakesfh.frontrunnerpro.com/runtime/189/runtime.php?SiteId=189&NavigatorId=30159&op=tributeViewCandles&viewOpt=dpaneOnly&ItemId=1066943&LinkId=226
http://www.facebook.com/drakesculpture

4 Replies to “O Captain! My Captain!”